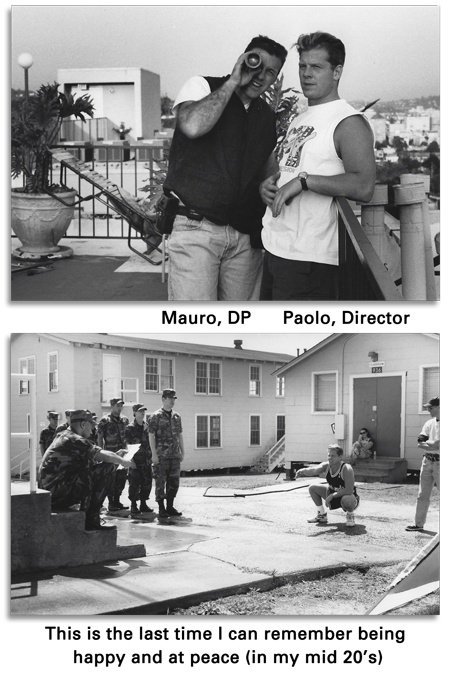 Paolo was directing his first spec AT&T commercial with Academy award-winning cinematographer Mauro Fiore while pursuing his dream to become a writer and director in Hollywood in his mid 20’s. At the same time, he was in the final stages of negotiations with a major studio to direct his first feature movie, “St. Charles”. In the final phase of negotiations, the deal collapsed. Paolo was devastated and fell into a depression. This was just one example of Paolo’s grandiose dreams almost coming to completion but falling a little short. This is a pattern in Paolo’s life story, which he describes in his life memoirs “Close But No Cigar”.

Paolo Dell Aquila, 50, is a former entrepreneur, sports performance coach and was an elite amateur athlete.  He played multiple contact sports. He was a New York State wrestling champion in the private school division during his senior year. He is a former rugby player and boxing sparring partner/human punching bag for pro fighters in Europe. As a part-time job, he fought bare-knuckle for extra cash in London while attending college.

Paolo is now suffering from brain disorders which he believes are a result of his time playing all of the contact sports listed above as well as from playing football in high school and for the London Ravens. He has had numerous concussions, as well as countless sub-concussive hits as part of routine practices and gameplay.  He was forced back into games and practices in an “inadequate amount of time” after receiving large blows to the head.

Approximately 20 years after his last concussion: 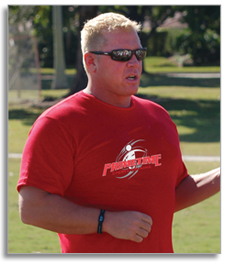 May 2015: – physically strong, Height: 5’10 ½ & Weight: 220 lbs.
I was operating several small businesses at the same time.  I was starting to have mild headaches and slight memory issues.  I started to have difficulty managing normal tasks.  Before receiving the information regarding my disease, the neurologists and primary care doctors sent me in for x-rays and CAT Scans which came out completely normal.  I was frustrated that no one could find the answer to what was going wrong with me.  In my mind, I was battling with the notion of whether I was a hypochondriac or whether I should pursue another specialist.  I was concerned that I possibly had early-onset dementia or Alzheimer’s because it runs in my family.  One of the neurologists I went to rule out Alzheimer’s based on my scans.  The doctors in my insurance network were doing the best that they could. Unfortunately, there were no referrals to specialists, specifically someone with expertise in CTE research. My advocacy for myself while dealing with doctors and brought me to the point of receiving an official diagnosis of Post TBI and CTE.  During my struggles and frustrations, I have been acquiring useful information on coping with the long-term struggles associated with Post-TBI, CTE and mental health issues. My continued advocacy for myself brought me to the coping strategies that I now have to help myself for today and hopefully tomorrow. 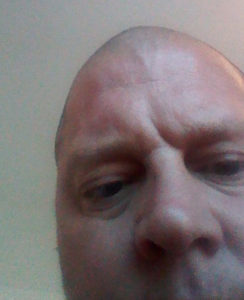 June 2017 – All POST TBI/CTE SYMPTOMS COME TO A HEAD. Could not function or work.  Cognitive function decreasing.  DOCUMENTED LIFE HISTORY OF AT LEAST 20 CONCUSSIONS (diagnosed medically) (Actual number estimated to be close to 100).  Countless sub-concussive blows as well.

I was in a very dark place mentally and physically.  One of the top sports neurologists in the West Palm Beach area diagnosed me with post-TBI and was 90% sure I had CTE.  He determined this through an open MRI and a neuro-psych test.  The sports neurologist prescribed me many non-addictive medications to treat the symptoms, but none of them worked for me.  The medications also created some negative side-effects like weight gain.

I was feeling weak and like a victim.  The doctor said the chronic pain is normal for what I was dealing with, but the truth was, the more I researched, the worse the pain and darkness got. At this point, I started feeling that my brain was dying slowly. I started to contemplate suicide.

2018 – Introduced to Dr. Bourne by the owner of Jupiter Drugs, Sanette Jansen.  She was my guardian angel.  She went above and beyond her call of duty and spent hours with me.  Dr. Bourne’s way of treatment is unmatched by any other psychologist I have ever come across.  Together we created my system of checks and balances. 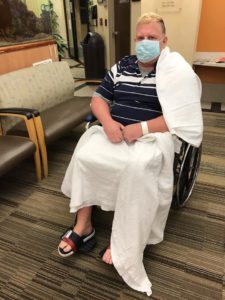 February 2019 – Height 5’8 & ¾ Weight: 298 lbs.
My spine has compressed and I have shrunk 2 inches.  I have gained over 100 pounds with comfort eating and being on medications.  After being released by a second pain management doctor, I was out of my pain medication (opiates) and suffering from severe anxiety because I knew I was going to go into severe withdrawal.  I was also extremely frustrated with the system.  I could not handle the pain and symptoms anymore. Pain management doctors would not take me in on my insurance network.  Some specialists would not take my insurance but would take me in if I gave them cash, which I could not afford.  I was sent to the emergency room and was given a 3-day supply of medication.  Due to the new drug laws, the hospital was not able to give me anything more.

I had 2 choices: go to the streets and get the drug of my choice or dance with the devil and go cold turkey on my own.  I chose to man up one more time and go cold turkey.  I came up with a game plan and coping strategies to help with the withdrawal. 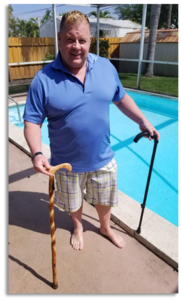 April 2019 Height: 5’8 ½ Weight: 278 lbs.
After the major withdrawals were manageable, I had a new outlook on life. I continued to put my trust in Dr. Russell A. Bourne, P.H.D. and I entered the ring of life for my final fight.

I started with using my coping strategies to manage my symptoms. I use a system I call checks and balances where I write down everything that I do and feel: good and bad.  I bring it into Dr. Bourne and together we make my game plan.

Here are two coping strategies that stand out and have kept me in the game of life.

“Note to reader: Trust me, I know these skills that I will be sharing with you might sound corny or easy but here they are.

For anyone suffering from any type of mental illness like myself:

It can be very challenging, and you should not feel weak or like a failure.  If you trip and fall, it’s okay as long as you get up!

“You can’t fail! the only way you can fail is if you don’t try!”

“When you’re trying to get out of that severe dark, painful place and motivate yourself, try and use these strategies”

Just my suggestions or words of encouragement to help you with the pain and frustration!

An example of giving back: I started to mentor one of my former clients in business part-time and teach him how to run a startup.  It hurts and drains me to work with him.  At the same time, it takes my mind off of the pain.

The young man’s name is Alexander Dwork, age 24, whose heart is pure.  One of the kindest and most generous people I have ever come across. He gave me the cool looking cane in the picture to lift my spirits.

Like most kids his age, Alex was insecure and kind of lost on the path of life.  He didn’t know what he wanted to do with his life or what career to go after.  I have known Alex for eleven years and have seen him grow from an awkward kid to now a young man.  I have given him the nickname Grasshopper.

We have bonded during this process. Where and how I cannot find the words. Now he is no longer a client, he is now like a little brother. I can see something special in him that I do not think others see. I want to mentor him correctly. I want to have him learn from my mistakes in life and have him create healthy behavior patterns and be a better man than I am.  These healthy behavior patterns that I want to instill in him include the ones I am forced to do now. My advice to him and others is to be humble, have no ego, do not be materialistic, and do not assume you know everything.  We can always learn something from life and pay it forward.

I want him to seek to work harder and to push himself to succeed in areas that are not fun or glamorous. If he can follow those rules, I know the sky will be the limit for him. After I pass on, he will continue our mission and help a lot of people and feel fulfilled at the same time. What a gift! He can help me, and I can help him.

Together we formed our not-for-profit (CPMHA) with our goal to help and spread awareness by sharing my story as the poster boy and sharing the coping strategies I use to combat my daily symptoms.  We want to change the negative stigma associated with mental illness and be advocates for mental health.